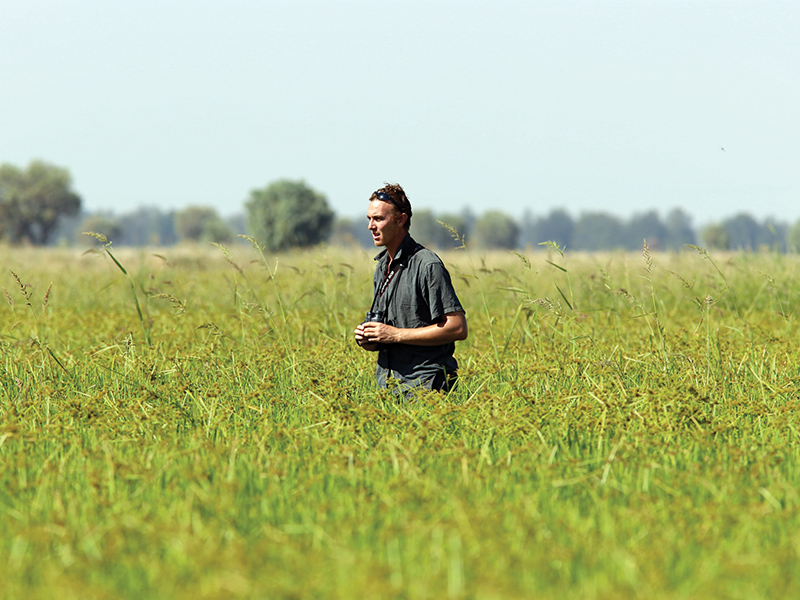 More than 60% of Australia’s land mass is managed by farmers, and they are custodians for thousands of natural and agricultural wetlands. Working on private land offers a challenging but rewarding career for a researcher.

My journey with threatened species conservation on private land began in the late 1990s. Living in Albury-Wodonga, I became deeply interested in the brolga population to the west and ended up doing my honours on them at Charles Sturt University. It was a positive and formative experience, and taught me how landholders can be vital for wildlife conservation and that we need to work together. Previously, I’d thought conservation was all about national parks and that farmers were the enemy. I was still in my early twenties and apparently an expert in waterbirds and wetland conservation.

I remember thinking at the time that if I’m already considered an expert then the state of our knowledge and capacity for conservation needs some serious attention. Landcare groups and government agencies began asking me to do research and community engagement, and so I was nudged into
starting my own consultancy.

I spent much of the next decade coordinating community wildlife surveys across the Murray catchment. These focused on engaging farmers and raising awareness about local biodiversity, as well as getting new information on wildlife distribution and habitat associations. l got a real kick out of showing a landholder their first squirrel glider and revealing they had a rare gecko down the back, or that their wetland supported six different bat species and the near-mythical Australian painted snipe. Witnessing their new appreciation of fallen timber, shrubs or farm dams was immensely rewarding. I surveyed hundreds of farms, and conducted more field days than I can remember. I made the classic error of young professionals, in taking on too much. I was beginning to burn out, and then came the final throes of the millennium drought. It was depressing. I was living and working out near Barham, mapping wetlands for environmental water prioritisation, and meeting with landholders who were at their wits’ end. I was acutely aware of the increasing tension between irrigators and environmentalists. The divisive public debate pained me.

In 2012, an opportunity arose for targeted work on one of my favourite birds, the Endangered Australasian bittern, on rice farms. I ran with it and the Bitterns in Rice Project began to epitomise my ideals of ecologists working alongside farmers to simultaneously produce food and conserve biodiversity. At times I’ve felt I’m in training for an imaginary profession: the ecological agronomist. After about four years, I was lured into doing a PhD on bittern-friendly rice-growing with Charles Darwin University, supported by the Threatened Species Recovery Hub. I’ve enjoyed broadening my horizons, formally embracing social science and economics. Another key motivation was to address my terrible track record of getting papers written up.

The narrative of a false dichotomy between farming and the environment lingers, but we are demonstrating ways of finding common ground, even with something as contentious and polarising as water resource management. I now have a few grey hairs, and soon I’ll work on my 1000th farm. Reflecting on this imminent milestone, I wonder how many gates I’ve opened and shut, and how many cups of tea I’ve had against my will. (I don’t like tea.) But the warm hospitality of the farmers I work with is something I’ll always treasure, and I’m learning just as much from them as they are from me.