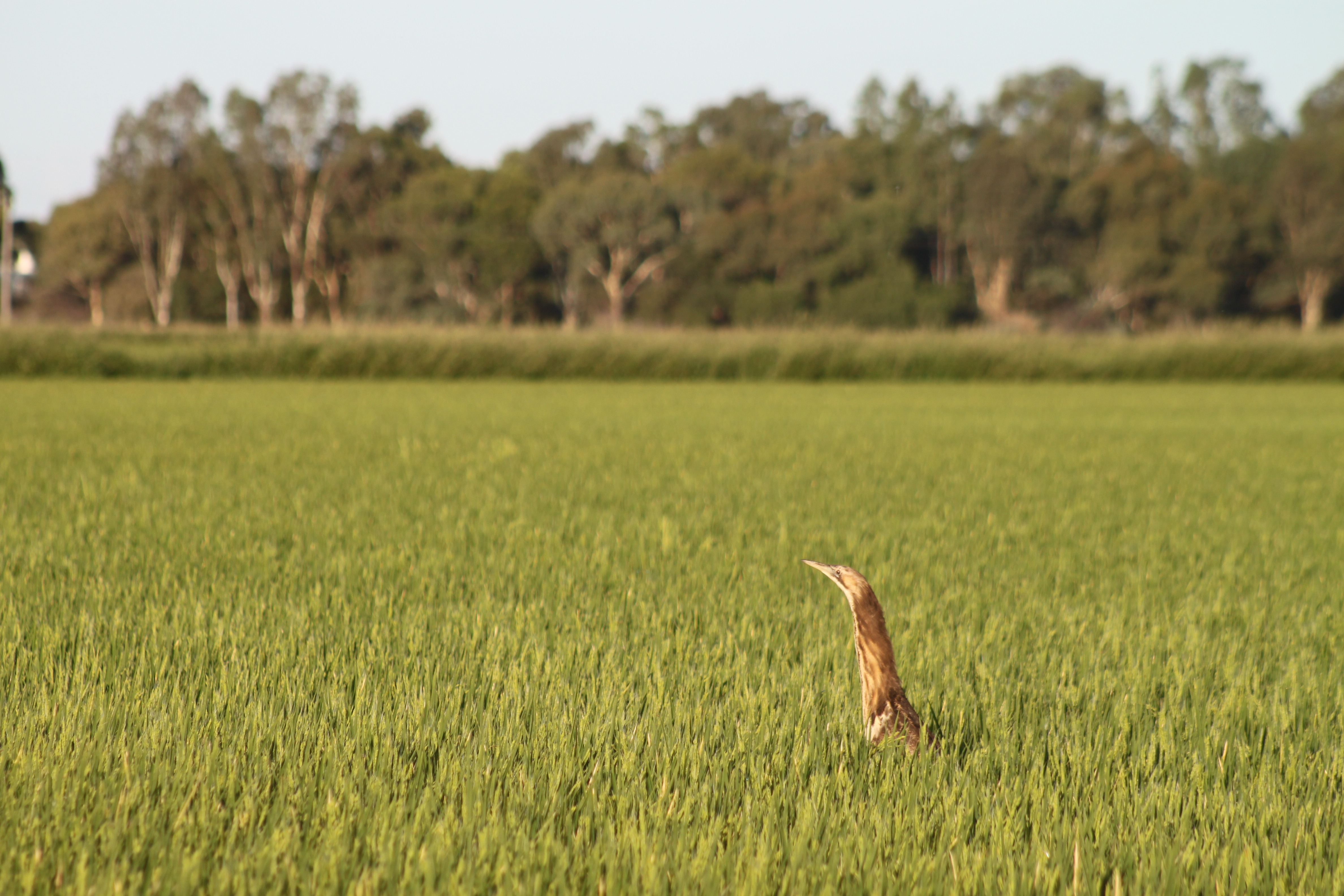 Australasian bitterns are the subject of many great mysteries – where do they go during the colder months? How do they make that famous booming call? Could they really be the source of inspiration behind Australia’s mythical Bunyip tales?

The Australasian Bittern has declined severely since European settlement of Australia and is now recognised as threatened, with an estimated 2500 adult birds remaining. The conservation management of bitterns forms the subject of Matt Herring’s PhD research, which is exploring the ways in which rice growers might be incentivised to adopt practices that support bittern breeding.

“Rice fields are incredibly important for bitterns because they support the prey (mostly tadpoles) that bitterns rely on during the breeding season,” says Matt, who has been working on the Bitterns in Rice project with the Ricegrowers’ Association of Australia, Birdlife Australia and Riverina Local Land Services since 2012.

A student at Charles Darwin University, Matt is conducting his PhD research under the supervision of Threatened Species Recovery Hub researcher Kerstin Zander.

“Matt’s is a really exciting project in that there are potentially wins for both farmers and birds,” says Kerstin. “Threatened species conservation can only work if there is community support. For that to happen they have to give value of some sort – economic, emotional, aesthetic, cultural, often more than one at the same time.”

“Often people trade-off different values to get the best result from them. For instance, a farmer who likes bitterns might accept a lower return on the crop. Alternatively, if they are providing a service by looking after bitterns, they may want more.

“This the evidence that Matt’s research will provide. From such evidence, we can advise policy-makers of options that could inform policy settings for the price of water or set up rice marketing schemes.

“Matt’s work goes to the core of one of the Threatened Species Recovery Hub’s themes – identifying the values people hold for threatened species and designing ways those values can be maintained.”

Matt says rice fields provide cover for their nests and young, creating habitat that provides sufficient food and the vegetation structure and shelter required by bitterns.

When farmed using traditional methods, rice is sown aerially, permanent water is released early and the growing season begins in October. The early permanent water suits bitterns and their prey, giving them sufficient time to breed and raise their young.

The issue is that Riverina rice growers are under increasing pressure to use less water. Water is also becoming more expensive – so growers are exploring alternative agricultural methods.

“The industry is using direct drilling and sod sowing to delay permanent water until December which is squeezing the growing season. This reduces water usage but also reduces the time available to the bitterns for breeding,” says Matt.

Therefore, trade-offs must be considered between water usage, biodiversity and food production. Bitterns are not the only birds taking advantage of the rice fields, with 53 different waterbird species spotted among the crops including whiskered tern, glossy ibis and Baillon’s crake.

“Irrigation water has often been quickly dismissed as having zero value for biodiversity. Our project has already highlighted that in some cases irrigation water is actually delivering significant conservation value.

“I love the idea of delivering research to support growing crops in ways that will deliver maximum benefit to both farmers and biodiversity,” Matt says.

Some of the options he will investigate include the potential for a premium-branded ‘bittern-friendly rice’ and water subsidies for growers who can demonstrate the conservation value of their farming practice.

“There’s already many keen farmers supporting this project but we recognise that goodwill can only extend so far.”

For further details on the Bitterns In Rice Project, visit bitternsinrice.com.au