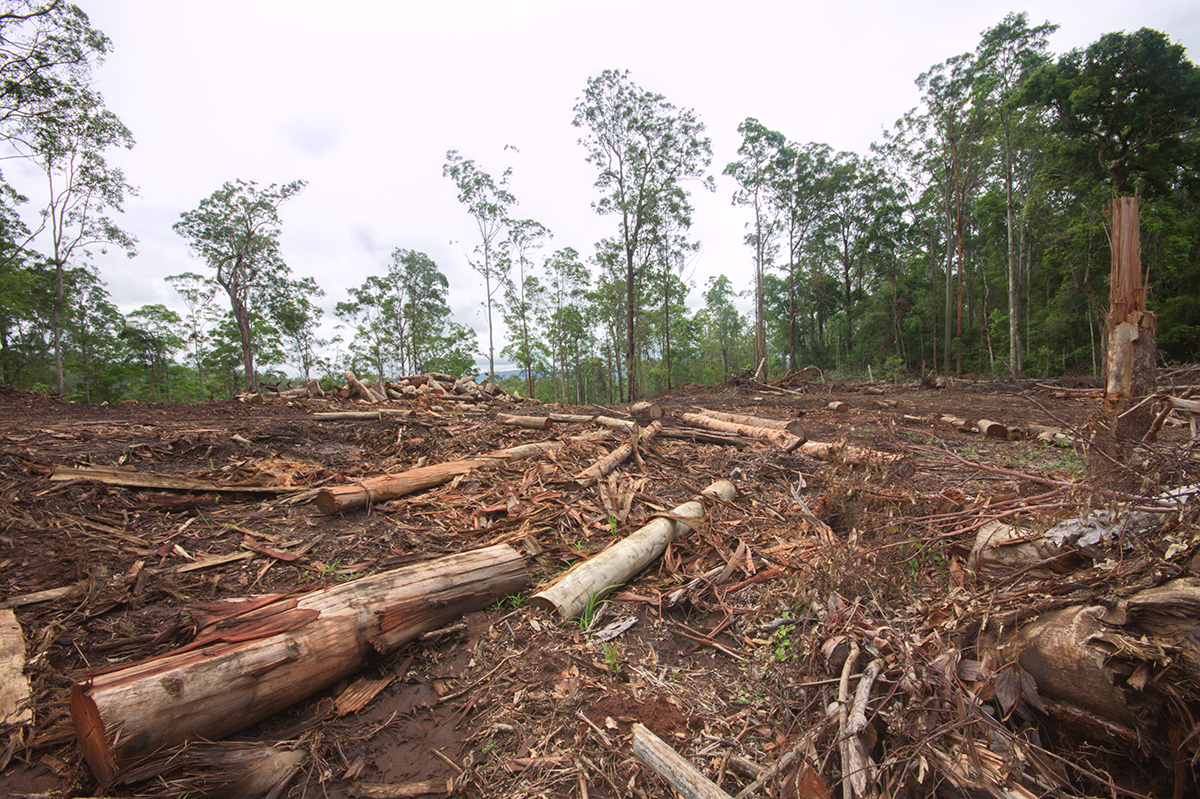 On feral cats AND clearing - It’s no beauty contest

In recent months you may have noticed some energetic public debate about what is the biggest threat to threatened species in Australia. Is it feral cats and foxes or is it the clearing and degradation of native vegetation? (For example, I contributed to one editorial appearing at The Conversation.)

The answer is that Australia’s threatened species are under pressure from multiple, interacting threats, and that feral predators and habitat loss are just two that are wreaking a terrible toll on our unique biodiversity. Other invasive species, climate change, changing fire regimes, disease, are some of the other thugs in the gang of extinction, and they all work together very effectively. Researchers in our Hub are working to better understand a multitude of interacting threats to species with the aim of finding effective ways to mitigate them.

While it seems somewhat academic and facile to be sweating on which threat is king (and which are the dark lords) of extinction while species are declining and people are frantically trying to save them, there is a practical side to this question. It relates to how we prioritise spending and develop policy around vegetation management and invasive species programs. If the pervasive narrative is that managing invasive species is paramount in the fight against extinction, then this will influence government spending and policy priorities, which will inevitably trickle down to local, catchment-level programs such as Landcare and Catchment Management Authority budgets. If renewed recognition of the importance of land clearing or climate change hit the headlines, then opportunities for meaningful dialogue and action on these key issues may arise. What we say as a community of scientists and experts does matter. So how we couch our messages really matters too.

A couple of key studies have explored the relative importance of threats to species globally and in Australia. According to a recent analysis of data from the International Union for the Conservation of Nature (IUCN), habitat loss is the number-one threat to biodiversity worldwide. Globally, more species are affected by habitat loss and degradation than by invasive species, disease or other threats. That’s the global story. Though, at a finer scale, there is evidence that islands are particularly susceptible to invasive species. 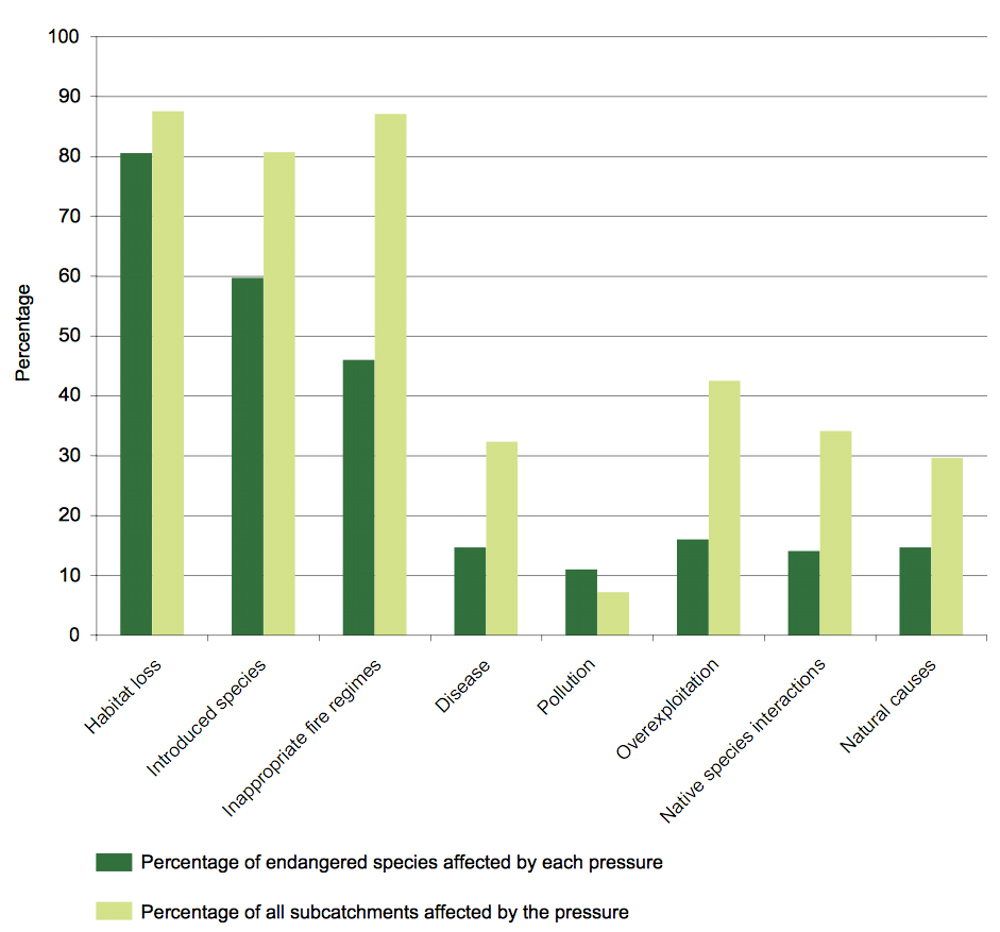 According to the Federal Government’s two most recent State of the Environment Reports (in 2011 and 2016), habitat loss is also a major threat here in Australia too, but invasive species have played a special role in Australia’s terrible extinction track record that bucks international trends. Depending on how you categorize and aggregate threats, you can argue that invasive species are as important, or even more important than habitat loss and degradation. The fact is that both habitat loss and degradation and invasive species are recognized as key threats to enough of our species that we won’t be taking our eye off either in the near future. A relatively large amount of research effort is allocated by our Hub to addressing the impacts of invasive species, which reflects the fact that we know pretty much what we need to do about habitat loss (stop clearing and degrading habitat!), but we have much to learn about how to effectively nullify the impacts of invasive species.

This is not a ‘beauty contest’ between invasive and clearing; this is two nasty intertwined evils that probably shouldn’t be compared side-by-side, but rather thought of as a synergistic snake pit. After obtaining a broad acknowledgement that both of these threats require much more funding and action than we currently invest, we gain little from arguing the minutiae and handing out gold and silver medals. A much more pressing task is to get on and figure out how we allocate our currently scarce resources to get the best bang for our buck in effectively solving these problems. AND obtaining the social license and greater funding to support conservation and policy improvement efforts.

Right now we are seeing a dramatic return to world-record breaking levels of clearing in Queensland and challenging new habitat management regulations in other states. At the same time, our colleagues are uncovering the horrific magnitude of the impact of feral predators in this country (see the box on ‘cats kill birds’). This is no beauty contest, this is a crisis that requires urgent policy reforms on habitat loss and unprecedented investment in managing invasive species if we are to avoid more heart-breaking extinctions.

NESP TSR Hub researchers are closely involved in all aspects of this problem, from fundamental research into which policies and actions work best in what contexts, and in publically advocating for resources and actions that will help prevent extinctions.


Cats kill birds – millions of them

Cats kill over 1 million birds per day in Australia. That’s the finding of new TSR Hub research recently published in Biological Conservation. The total is made up of an estimated 316 million birds killed by feral cats each year (and 61 million killed by pet cats). More than 99% of the bird prey are native species.

The estimates are based on results from nearly 100 studies across the country, each sampling cat density, and another set of nearly 100 studies across the country that assessed the diet of feral cats. Lead researcher (and TSR Hub Deputy Director) John Woinarski said that while previous research has looked at the impact cats are having on Australia’s mammals, this is the first nation-wide assessment of the impact of cats on Australia’s birds.

“Everyone knows that cats kill birds, but this study shows that, at a national level, the amount of predation is staggering, and is likely to be driving the ongoing decline of many species,” says John Woinarski.

“For Australian birds, cats are a long-standing, broad-scale and deeply entrenched problem that needs to be tackled more effectively,” says Woinarski.