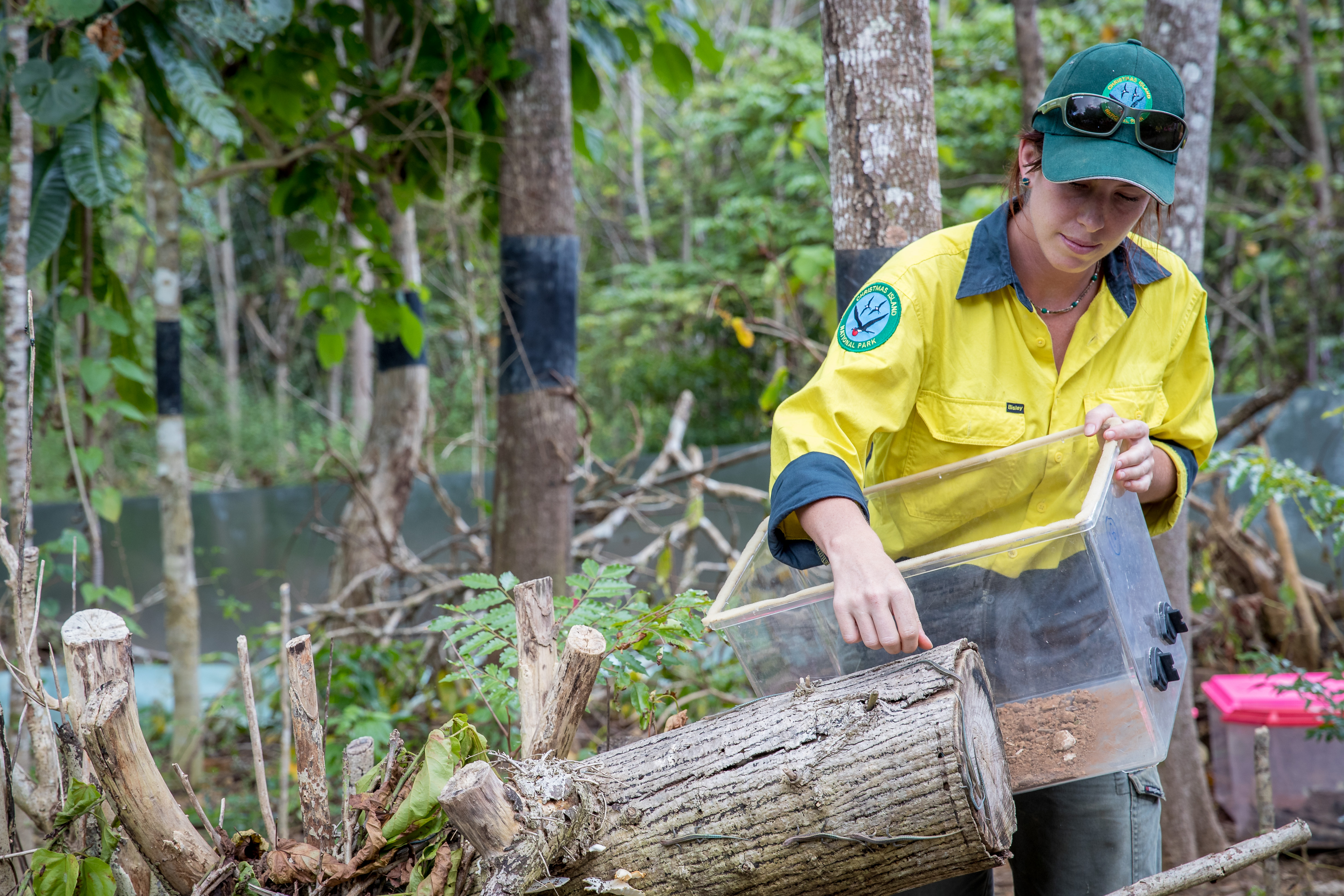 Two of the most successful captive breeding programs in Parks Australia’s history have brought the Lister’s gecko and blue-tailed skink back from the brink of extinction.  Building on this success the skink has now been released into a wild enclosure, the first step towards reintroducing them back into Christmas Island ecosystems.

These two Christmas Island reptiles were widespread until the 1990s before numbers began dramatically declining, with introduced predators such as wolf snakes thought to be responsible. Parks Australia and Taronga Zoo worked urgently to start captive breeding programs for these two threatened species.

Christmas Island National Park Field Program Coordinator Brendan Tiernan, who has worked on the island for more than a decade, was involved in the captive breeding program from its inception.

“When I arrived the blue-tailed skink was roaming freely in healthy numbers across the island,” Mr Tiernan said. “But when numbers dropped dramatically national park staff intervened, and in 2009 and 2010 the Christmas Island team began catching the lizards in preparation for captive breeding.

“In 2010 we caught 20-30 blue-tailed skinks from a site the size of a tennis court. It was the last known area where we could find them. In establishing and maintaining the captive population, we overcame many unknowns as neither species had been bred in captivity before.

“In 2016 we doubled the population of each species starting with fewer than 500 and ending with about 1000 individuals of each at the end of the year. We’ve exceeded our expectations. But it took a lot of careful management, resourcefulness and ingenuity.”

The large and healthy captive populations are allowing Parks Australia to consider options for the reptiles beyond captive breeding. In April 2017 the first trial began, when 139 blue-tailed skinks were released into a 2500 square metre fenced enclosure after predators were removed.

TSR Hub researcher Jon-Paul Emery from The University of Western Australia, is working closely with Christmas Island National Park staff to monitor the release and fill gaps in our knowledge about the blue-tailed skink.

“We’re closely monitoring the trial to assess the survival and condition of the skinks, which so far are doing very well, and to guide decisions about future releases of the skink and potentially also the gecko,” Mr Emery said.

“What we’re hoping for is that the skinks will establish functioning self-sustaining populations with minimal intervention from people, if introduced predators are controlled.

“If this release is successful, it will allow the potential for more skinks to be reintroduced into enclosures on Christmas Island, a major step in securing the future of the species".

Not much is known about the behaviour, habitat and diet preferences of the skink in the wild so monitoring this trial is a valuable opportunity to advance our understanding of this species, and will be important for identifying potential future release sites.