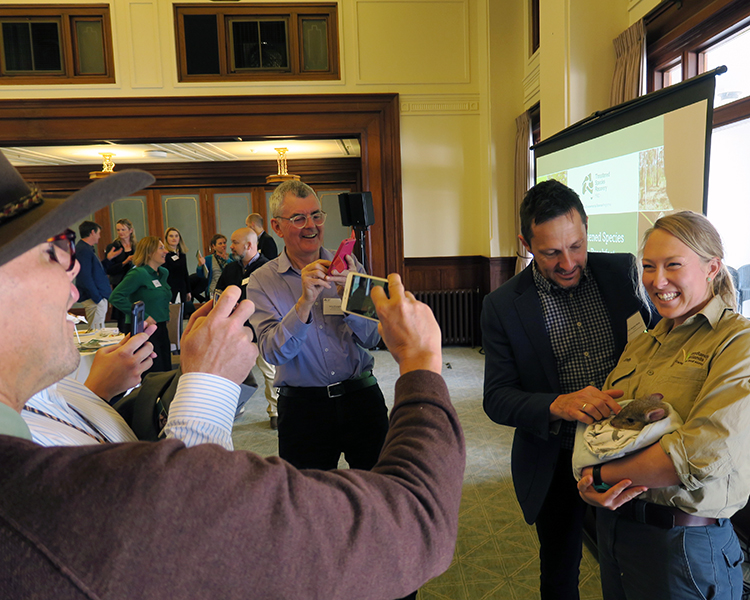 Monday, 02 October 2017
Rachel Morgain (Knowledge Broker for the TSR Hub) describes a breakfast with a difference.

I suppose it was inevitable, but as soon as I mentioned that the TSR Hub was staging a ‘threatened species breakfast’ invited guests couldn’t help but ask: “Really, what species are on the menu?” To which I would reply: “northern corroboree frogs and eastern bettong,” and we would all laugh – except that I wasn’t joking.
Okay, corroboree frogs and eastern bettong weren’t on the menu so much as being with the menu. Both species were present at our special Threatened Species Day Breakfast held at Old Parliament House on a cold, windy morning in early September – Threatened Species Day 2017 (see the box on Threatened Species Day). Both species served as emblems of our nation’s fight to slow and reverse the catastrophic declines we are witnessing in our native biodiversity. Thanks to good science and clever management, both are making a comeback (see the boxes on frogs and bettongs).

And, judging by the chorus of frog croaks echoing around the dining room and the calm, contented manner of Banksia, the lovely bettong brought along for the show, the individual animals representing their species didn’t appear too put out by the proceedings.

Some might say having these animals present was simply a gimmick to bring the punters in, but if you had been present I think you would have been amazed at the attention and wonder they generated in the breakfasting crowd.

And that, in part, was the point. Threatened Species Day is an occasion to stop and reflect on what we have lost, what we might be losing, and what can be done to redress the parlous state so many of our native animals, plants and ecological communities now find themselves in. The TSR Hub, for its part, saw it as an opportunity to stage a breakfast in the heart of the nation’s capital that would bring together policy leaders, scientists and advocates for science and the environment, to focus on the challenge of saving threatened species. 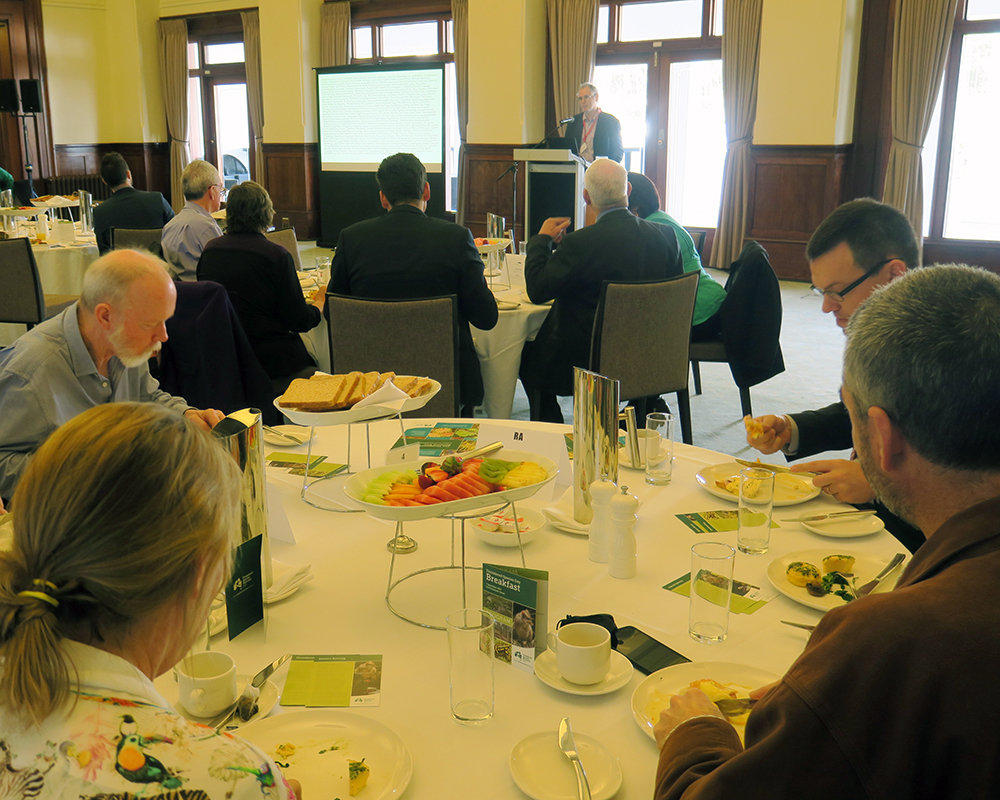 Image: John Woinarski sets the scene for the Threatened Species Day TSR Hub Breakfast by summarising what has been lost (including mention of the extinct Australian animals and plants pictured at the top of the page), what science is telling us about what we need to do, and why this is one fight we can’t afford to give up on. Image: David Salt

The event began with a warm welcome from Ngunnawal Elder Warren Daley and opening remarks from TSR Hub’s Director Brendan Wintle who noted that: “Doing conservation research in this country, I’m always struck by the deep human history of nature stewardship, of the 60 plus thousand years that First Nations people have been custodians of our amazing natural heritage – And, of course, the speed with which the balance has been lost since European settlement. Which is why we’re here today, to talk about ways of rediscovering that balance.”

Brendan then asked three of the Hub’s leading researchers to briefly outline the dimensions of that challenge and how we are tackling it. John Woinarski gave a powerful testament to what we have lost with every extinction in Australia, but also encouraged us not to lose hope, showing how dedicated conservation action and science has slowed down, and could even reverse, these terrible trends.

Martine Maron invited us to think creatively about what we mean by biodiversity offsets, how we can do this better, and the possibility of moving beyond our current ‘no net loss’ system to a regime of net biodiversity gain.

And Sarah Bekessy spoke of the importance of sustaining ‘everyday’ nature in our urban living spaces: “We’re not talking about offsets here,” she said. “We’re talking about biodiversity onsets, the establishment of new habitat spaces in our cities and homes, and all the benefits that brings to our society.” (I’m pretty sure this isn’t what people usually mean by the term ‘onsets’; but maybe it will be now.)

The Threatened Species Commissioner Gregory Andrews gave our keynote address. He spoke of the enormous fulfilment his job had given him in the three years he had held the post, and of his best wishes to the next Threatened Species Commissioner, and to the threatened species movement as a whole. As he said, science is one of the pillars of the Threatened Species Strategy he championed, of which he is rightly proud. He is moving back into the diplomatic service but hopes to be active in his support for threatened species conservation as a citizen (and maybe a citizen scientist).

The TSR Hub has enjoyed an excellent relationship with the Commissioner: as Steering Committee member, partner, advocate and ally of our work. It was very fitting that the breakfast gave us, through Hub Director Brendan Wintle, the opportunity to thank Gregory publicly for his effort and support. As a token of our gratitude Brendan presented him with a framed set of our Hub’s stencilled illustrations, drawn by Michelle Baker.
Of frogs and bettongs

Corroboree frogs with their striking black and yellow markings are Australia’s most recognisable frogs. There are two species, northern and southern corroboree frogs. Both live in remote sub-alpine wetlands in south-east Australia and both are critically endangered. The primary threat to these frogs is the deadly chytrid fungus. Captive breeding programs have been established in NSW, ACT and Victoria to prevent their extinction. The hope is that research will help conservation managers re-establish many self-sustaining populations in the wild. 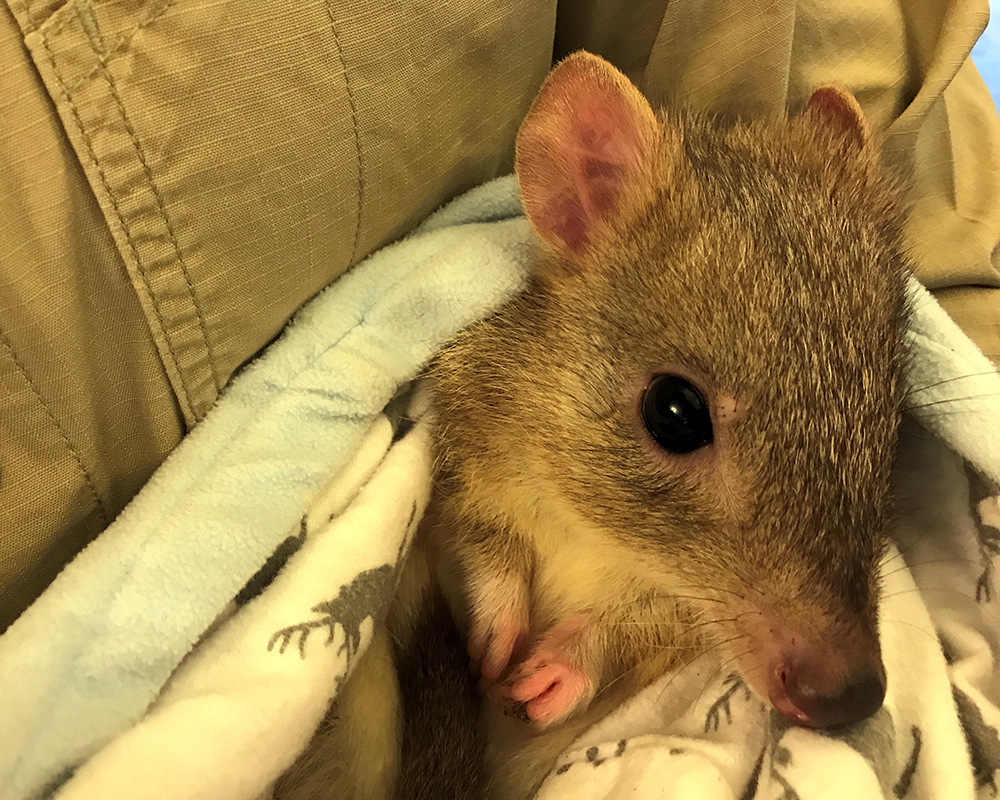 Image: Banksia the bettong attended the breakfast courtesy of the Woodlands and Wetlands Trust (thanks to Banksia’s handler, Emily Belton). Photo: Anna-Lisa Hayes
Eastern bettongs were once common throughout the woodlands of south-east Australia where they provided an important ecosystem service by digging up the soil for food and, in so doing, cycling nutrients and improving soil structure. But they disappeared from the mainland in the 1920s, with foxes believed to have played a major role in their decline. In fox-free Tasmania, however, the eastern bettong can still be found. In recent years Tasmanian bettongs have been brought to the ACT where they have been released in a fox- and cat-free exclosure at Mulligans Flat. From a starting population of 36 bettongs there are now over 200 who call the sanctuary home. 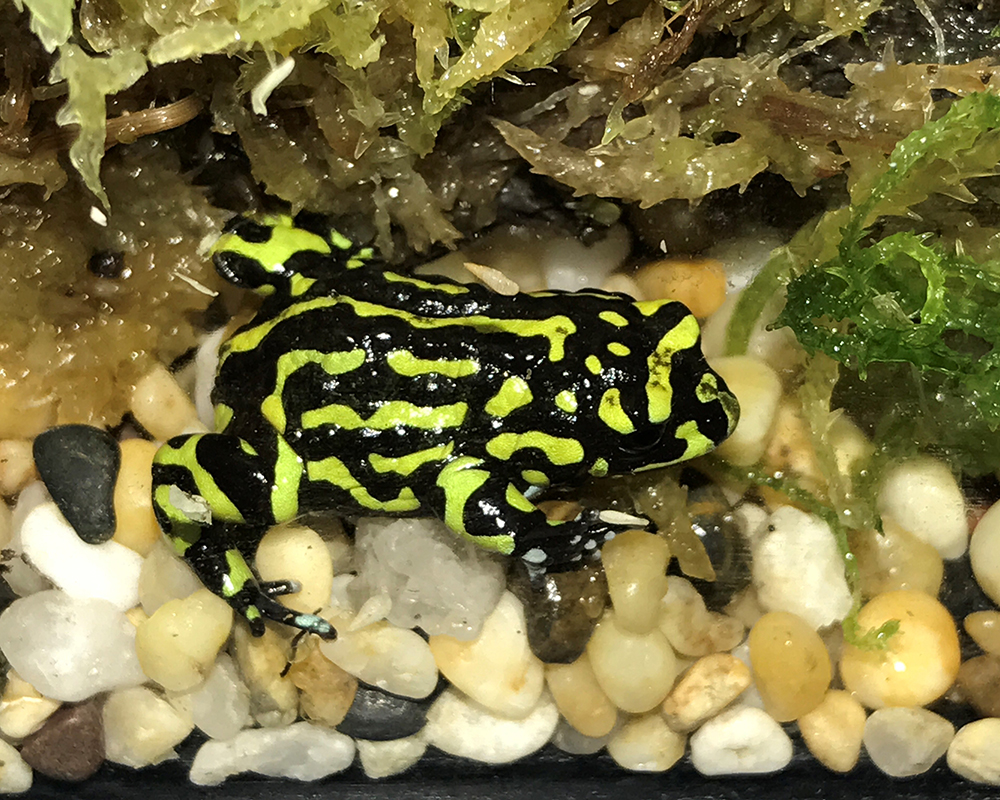 Top Image: Everyone gave their polite attention to the speakers but the star of the show was Banksia the bettong (held here by its keeper Emily Belton). Photo: David Salt